After five years of unbearable chronic pain, six gastrointestinal specialists and several emergency room visits, an Army spouse finally learned the cause of her pain: a laparotomy towel was left inside her abdomen from a C-section performed at a US air base outside Tokyo.

The Air Force offered Angie Perry $50,000 to settle her medical malpractice claim but she refused and is seeking $1 million in compensation.

'There is no doubt in my mind if that towel wasn't found, it would've killed me,' she told Stars and Stripes. And Perry isn't the only one, in 2020 the Pentagon reported 17 cases of objects left in patients by surgeons at their medical centers.

Perry had a scary Cesarean section in 2013 on the Yokota Air Base in western Tokyo, at points thinking she was going to die. The surgeon, who no longer works on the base, was new to the job, according the doctor's resume.

'At one point, the surgeon couldn't stop the bleeding and things got a little frantic in the surgery room where the nurses were pleading with the surgeon to let them go ask another surgeon to come and assist,' Perry said.

'I thought for certain I was going to die right there.' But Perry and her newborn made it home. 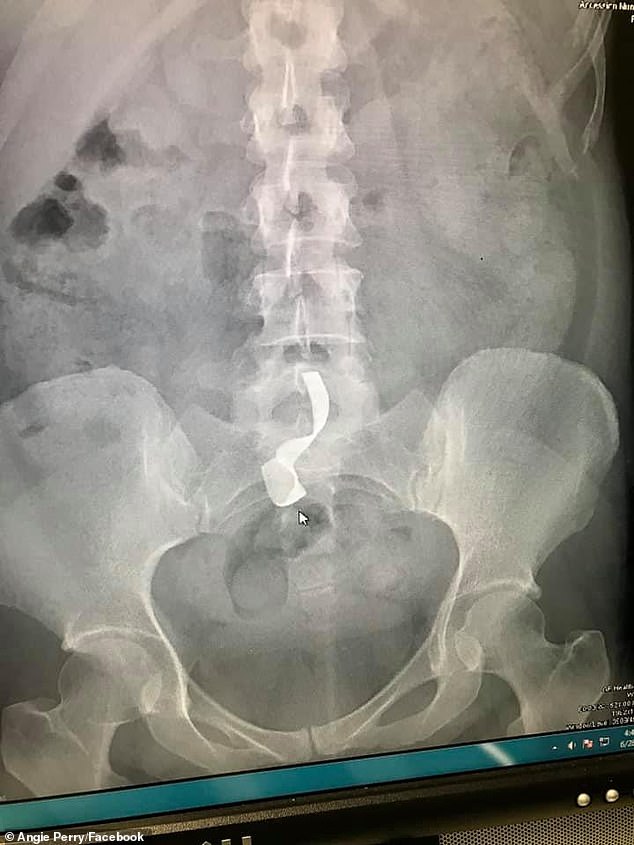 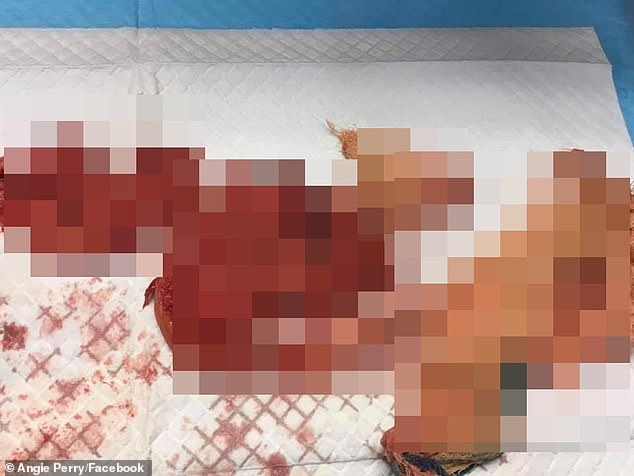 The towel caused Perry years of chronic pain, digestive issues, and bladder problems along with the emotional toll her health struggles it took on her family

Following her surgery, Perry suffered through a series of chronic health problems and saw 27 doctors while living in Japan.

She experienced three years of distracting pain, thought her digestive system shut down, and had to wear diapers because she lost control of her bladder.

Her health anomalies disrupted her from bonding with her newborn child for the first years of his life and added stress to her marriage.

'I was getting into fights with my husband because he was so angry and believed I turned into a hypochondriac,' she said. 'He didn't understand why I was addicted to going to the doctor … I had never experienced pain like this before.'

Perry, who now lives in Vancouver, Washington, finally found an answer in 2018 when a CT scan detected the metal tag on the laparotomy towel inside her abdomen. She finally had the towel removed on October 31, 2018.

'We do recognize that a laparotomy pad was discovered to have been retained in the abdomen, which may have caused some pain,' the letter from the Air Force states.

'Although abdominal pain is a symptom of a retained laparotomy pad, pain is subjective and by October 22, 2013, Ms. Perry had no abdominal pain.'

But Perry will not settle, she explained to DailyMail.com: ‘I won't take their offer is because I can't sit quiet about it and be paid off not to expose them.’

Perry claims: ‘The military basically has free reign to experiment and practice on our bodies overseas without any repercussions because there are specific laws that protect them from being held accountable.’

She also said: ‘This surgeon just received her medical license in 2013 to become an MD & Was NOT A surgeon yet. The system is broken - And there's nothing that stopping them from doing harm.’

Perry hired a medical malpractice attorney in Texas in April 2019 and now is seeking different representation to continue her fight.

'My bladder still doesn't work, there's a lot of scar tissue, it caused a huge wedge between my husband and me,' she said. 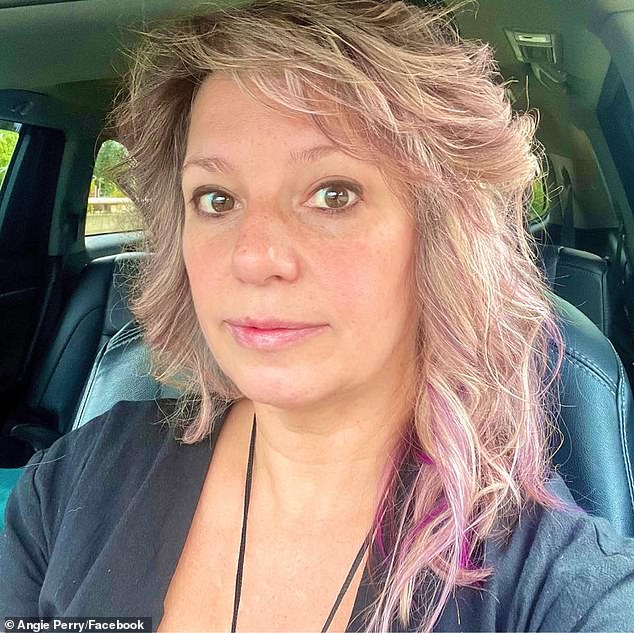 Perry went to 27 doctors in Japan, six gastrointestinal specialists, and had several emergency room visits before a doctor in the US found the laparotomy towel 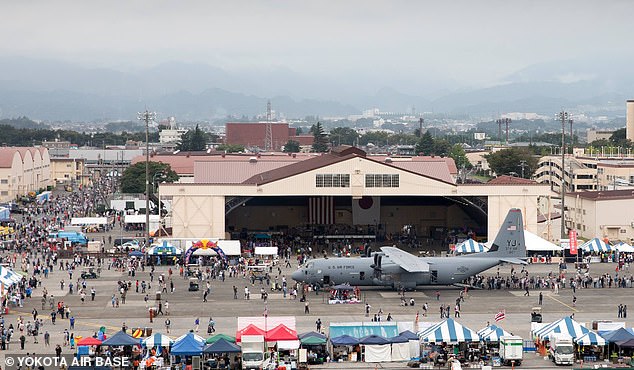 The same doctor who performed Perry's surgery also botched another C-section on the Yokota Air Base (pictued) in 2013. Lamia Lahlou discovered she had a mass of infection along with cotton balls left inside her abdomen, a 21-cm abscess and other leftover materials after months of being in chronic pain following the birth of her second child

'The stress of knowing every single day that something was wrong with me, but I couldn't get a doctor to listen to me. It took away the first five years where I should have been enjoying the new baby, but I was so weak that my health consumed every waking moment. I believe, after everything I have been through, it is what I deserve.'

A spokesperson from Yokota Air Base told Stars and Stripes the 374th Medical Group and the base's legal department cannot speak about individual cases.

'We cannot provide the details on an individual's specific case in the interest of protecting personal privacy or avoiding impact to a potential ongoing investigation,' Tech Sgt. Taylor Workman said in an email.

But Perry wasn't the only one who was left with a piece of medical equipment left  inside them from the Yokota Air Force Base. Lamia Lahlou, a former Arabic linguist for the Army, shared a similar disturbing situation with Stars and Stripes.

Lahlou had a C-section performed by the same surgeon the same year as Perry.

Following her childbirth, Lahlou also began to experience excruciating chronic abdominal pain and digestive issues which her doctors in Japan were unable to diagnosis.

'I was in so much pain that I thought maybe they put my organs in wrong,' she explained. But her doctors insisted that her pain was a normal part of the healing process and then told Lahlou that her pain was psychological directing her to a mental health clinic.

'I felt like I was being told I was crazy,' she said. 'But I thought that maybe they were right. I believed that doctors knew better.'

When Lahlou finally returned to the US several months later, she couldn't handle the intense pain and called a doctor who ordered a CT scan. The scan finally revealed that Lahlou was not crazy, she had a mass of infection along with cotton balls left inside her abdomen, a 21-cm abscess and other leftover materials.

Lahlou underwent five surgeries and the removal of part of her bladder to remedy the situation but the malpractice has had lasting effects on her life.

Air Force offers $50,000 to Army spouse who had a TOWEL inside her for FIVE YEARS after a C-section

Read Air Force offers $50,000 to Army spouse who had a TOWEL inside her for FIVE YEARS after a C-section by Daily Mail

Why do NFL and college football players wear a towel when they play?

Read Why do NFL and college football players wear a towel when they play? by as.com on MSN.com

Giants vs Rams: Joe Judge not throwing in the towel just yet after 1-5 start | Giants Post Game

Read Giants vs Rams: Joe Judge not throwing in the towel just yet after 1-5 start | Giants Post Game by Yahoo! Sports